History of the Awards

The defense of a public dissertation of the eight candidate project´s for the AR&PA 2016 International Award for Cultural Heritage Actions was held in the “Sala de Cámara” of the Centro Cultural Miguel Delibes Cultural on Friday, November 11 from 4:30 p.m. to 8:00 p.m.

And the honorary awards go to:

Mr. Mounir Bouchenaki, in recognition of the achievements reached in his career, during which he has worked at various international institutions, and of his far-reaching view of culture, and his ability to use his interdisciplinary skills to bring people together to solve heritage management problems. 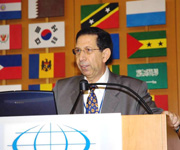 The Santa María de Albarracín Foundation (Teruel), for having devised and put into place a sustainable and ongoing restoration and dynamic management programme at a complex Medieval heritage site.

The transfer and restitution of the Obelisk of Axum from Italy to Ethiopia, in recognition of an institution’s decision to return a heritage asset to its legitimate historical owner, and to carry out the technical work to make this possible.

The unveiling and restoration of the Renaissance paintings in the Great Chapel of Valencia Cathedral.

The Chapel was restored by the Valencian Institute for Conservation and Restoration of Cultural Heritage. This action was awarded for the great thought and consideration put into it, the rigor in the methodology used and the courage with which the project sponsors dealt with such a technically complicated issue, using a multidisciplinary approach and involving international experts.

Aside from the end result, the approach used has also made it possible to progress towards a definitive solution for restoring the vault’s original arrangement and design in full.

Ex-aequo award for restoration of the cave church of St Just and St Pastor in Olleros de Pisuerga (Palencia), in recognition of the research done in order to tackle the challenge of installing facilities within a historic asset in a sustainable way and based on the heritage values of the site itself.

And also for the restoration of the wharf building and warehouse of the Channel of Castile in Medina de Rioseco (Valladolid), as an action that has helped to give value to the whole Channel of Castile, by making the most of all its elements; and for being a good example of an industrial building representative of a type of heritage in need of particular attention. 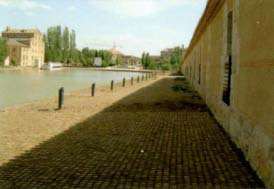 The 2008 AR&PA awards were presented at the closing ceremony of the 6th International Conference “Restaurar la Memoria”, which was held on 2 November at 12:30 pm in the Conference Hall of the Feria de Valladolid exhibition centre.

The Casa de Velázquez, in recognition of its work and dedication to Hispanic studies, contributing to the understanding, conservation and dissemination of Spanish cultural heritage.

Honorary mention to Mr. José María Losada Aranguren, in recognition of his constant dedication to protecting and raising awareness about cultural heritage, both in Spain and abroad.

Ex-aequo award to Mr. José María Ballester Fernández, in recognition of his work at the Heritage Division of the Council of Europe to promote and implement public protection and landscape policies.

And to Mr. Ignacio Gárate Rojas for his contribution to the understanding of traditional techniques and their use in the restoration of historical heritage.

The Santa María la Real de Aguilar de Campoó Foundation (Palencia), for its work in setting up sustainable and innovative initiatives, closely linked to the local region, to conserve and manage historical heritage. 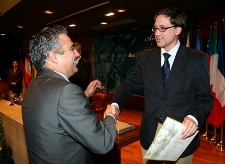 Honorary mention for the restoration work carried out on the building at number eight in Isabel la Católica Street in Segovia (Casa Mudéjar), to ensure the rigorous restoration of heritage features during the building’s conversion into a hotel. 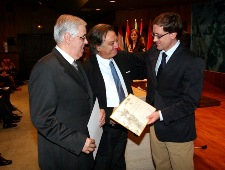 The judges congratulating the Historic Heritage Foundation of Castilla y León on its tenth anniversary.

Francesco Bandarín, Director of UNESCO's World Heritage Centre, in recognition of his work in guaranteeing professional standards in the management of the UNESCO’s World Heritage List, for speaking out for fairer representation, both geographically and in terms of the range of types of heritage included, and for his efforts to ensure that governments better safeguard these sites, abiding by World Heritage rules.

The city of Santa Fe de Bogotá (Colombia), in recognition of its efforts to rehabilitate and restore the historical neighbourhood of La Candelaria.
And to the Province of Val Di Noto, in Sicily (Italy), in recognition of its determined work to restore a great number of monuments following the 1992 earthquake and after an absence of such projects for many years, as well as its work in managing a large region full of monumental heritage.

The Roman Villa of Almenara de Adaja-Puras (Valladolid), in recognition of its comprehensive conservation and management plan, and the excellent work done to publicise this Asset of Cultural Interest.

The Spanish Academy and the Spanish School of History and Archeology, both in Rome, in recognition of their work over recent years to spread Spanish culture and research overseas.

The renovation of the Tate Modern, in London, and to Herzog and De Meuron, the architects responsible for rehabilitating this piece of industrial heritage for public use, and to the Finnish professor Jukka Jokiletho, in recognition of his career achievements and his devotion to protecting and raising awareness about the World Heritage Cities.

The technical team from the Spanish Historical Heritage Institute, which returned and reinstalled the paintings of the Hermitage of San Baudelio de Berlanga (Soria) to their place of origin.

The Office of the Consortium of Santiago de Compostela and to the Special Protection and Rehabilitation Plan of this Galician city, in recognition of their exemplary work and skills in conserving the original buildings and the historic part of the city.

The work carried out by the architect Fernando Cobos at the Castle of Ponferrada, and for the scientific methodology used.

The restoration work carried out on historical spaces at the Patio Herreriano Museum of Contemporary Spanish Art in Valladolid and the Salamanca Arts Centre in order to exhibit contemporary art.

The company Coresal, in recognition of its work to Restore The Benavente Chapel in Medina de Rioseco, both for the techniques used and for its contribution to the achievements of the Almirante Consortium in stimulating this historical city, as well as its collaboration with various institutions and bodies in carrying out this work.

Bernard Fonquernie, in recognition of his comprehensive and exemplary restoration work at the Nôtre Dame Cathedral in Paris.

Manfred Whedorn, in recognition of his restoration of the Royal Palace in Vienna, and also to the Instituto Central del Restauro in Rome, for its longstanding and renowned work on Italian Heritage and especially its project to restore paintings at the Church of St Francis of Assisi, with the use of IT techniques.

Antoni González, Head of the Local Architectural Heritage Service at the Provincial Government of Barcelona, for his career achievements, methodogical clarity and his work to disseminate these values.

Chillida Museum, in recognition of its important work in disseminating Basque Culture within Spain, and also to Zaragoza Cathedral, for its varied heritage actions.

The Restoration of the Altarpiece of Astorga Cathedral and also to the restoration company ARCO, in recognition of its rigorous restoration work, and to the project sponsor, The Historic Heritage Foundation of Castilla y León.

The restoration of the San Boal Palace in Salamanca, the University of Salamanca and the 40 Japanese companies that sponsored the project.

Juan José Martín González, in recognition of his lifelong dedication, for having established the foundations of Cultural Heritage knowledge, and his efforts to conserve and restore this heritage.

The Provincial Wine Museum, in recognition of having been able to give wine new purpose, and for the easily-reversed and rigurous work carried out, and also to project manager Roberto Valle, the company NECSO and the Provincial Government of Valladolid, as sponsor.